Thrustmaster Hotas Warthog Joystick
The HOTAS WARTHOG USB dual-throttle joystick is the result of an intense collaboration between Thrustmaster’s development teams and members of the “simmer” community. Exchanges and studies were carried out constantly throughout the product’s development phase, in order to create a joystick which meets the most specific and precise requirements of the experts.

Thrustmaster Hotas Warthog Joystick - A Class Of Its Own
Weighing in at more than 14 lbs and using metal for the joystick, throttle handles, and bases, the HOTAS WARTHOG joystick is physically imposing. When you take into account the 55 fully programmable action buttons and 2 four-direction hat switches, each with a built-in push button (the first joystick in the world to incorporate such a feature), it becomes clear that the HOTAS WARTHOG is in a class of its own.

The Most Precise And Feature-filled Joystick You Can Get
The joystick features 19 action buttons, along with a “Point Of View” hat. It provides extreme precision, thanks to the H.E.A.R.T HallEffect AccuRate Technology magnetic sensor system it employs: 16-bit precision (65536 x 65536 values), with no gimbals (cardan joints).

Control Panel With 5 Programmable LEDs
The product’s final mechanical component, the control panel, provides an extensive number and variety of controls. It includes a friction wheel, allowing users to manually adjust the resistance of the throttles according to their own taste. It also features backlighting for functions, which users will certainly appreciate for night flights; the 5 programmable LEDs are also a plus for use in dark or low-light conditions. The base includes a “trim wheel” and 15 action buttons, including numerous push buttons with resistance identical to that on a real airplane and industrial metal switches (2 or 3 positions) with highly realistic pressure. 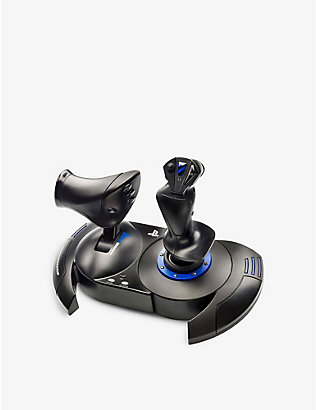 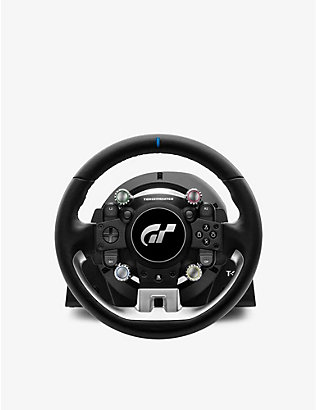 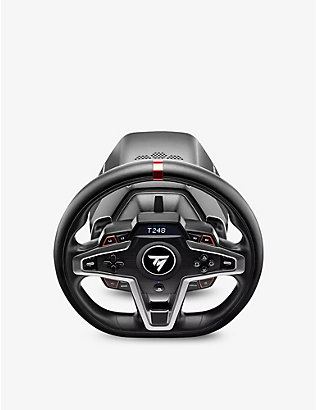 T248 racing wheel and T3PM magnetic pedals Playstation set
£299.00
While your childhood dreams of becoming a pro racing driver might not have come to fruition, that doesn’t mean you can’t be the champion of your home. With Thrustmaster’s video gaming equipment, you'll be thrown into life in the fast lane with an innovative range of high-tech accessories - designed for those with oil in their veins and velocity in their hearts. Enjoy a wholly immersive experience, with gear sticks, steering wheels and realistic audio that fulfil your need for speed without having to leave the house.